One other thing that happened late summer/early fall was the much needed cleaning of the Lions Den.  With four people working (Sandy, Mark, John and Sally) much was accomplished. 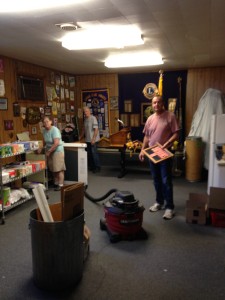 The August dinner meeting was the annual cook-out with area nursing homes and the evening was a success.

SEPTEMBER:  The September dinner meeting featured guest speaker, Katie Blackadar, a Moultonborough Academy graduate who received her RN degree from UNH.  Her first nursing experience was in Tennessee and from there she became a traveling nurse, her latest position being in the state of Washington. Katie spoke to us about her 10-month volunteer experience on the Africa Mercy, which was docked in Madagascar. She began with a video outlining one patient’s story and then told us about  the different kinds of operations performed on the ship…tumor removals, facial surgeries, and orthopedic (club feet) to name a few. The number of people needing medical assistance and surgeries was staggering. Katie lived in an onboard cabin with 5 other volunteers and worked in outpatient care on the ship, tending to the needs of post-op patients. Katie’s experience was very positive, and not only did the Mercy Ship experience provide inspiration for her and renew and redirect her dedication to nursing, it is also something she would like to volunteer for again. Volunteers must pay their own way and for all their living expenses, so this is truly a giving experience for the hundreds of men and women from all over the world who provide their expertise, love, and dedication to others. 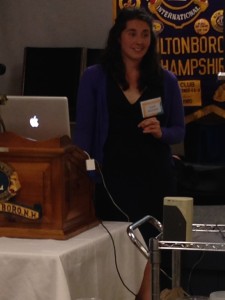 The Lions Club performed two vision screenings:  One at Moultonborough Academy, coordinated by nurse Carolyn Nelson on picture taking day (Friday, September 25), where over 200 students in grades 7-12 were screened.  And the second on Wednesday, October 7 at Inter-Lakes High School where over 100 seventh and eighth graders were screened thanks to scheduling by nurse Jodi Pendexter. 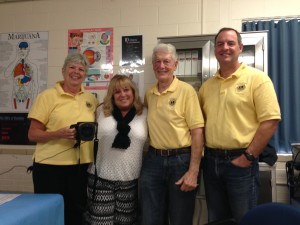 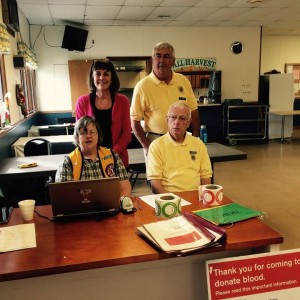 Also in October, Lions Don Trudeau and Sally Sibulkin did the final fall weeding of the top area of Sutherland Park.  More help will be needed in the spring with some new plantings and the staining of the picnic table and benches.

The October dinner meeting will be held on Monday, October 9.  District Governor Scott Wilson will induct five new members to the Club at this time.  Photos will follow after the event.

Also in October…on Friday October 30, beginning at 9 am (with coffee and donuts) as many Lions as can make it are asked to come to the Club and help stuff the envelopes with letters and raffle tickets for the annual raffle fund-raiser.  The winning ticket will be drawn at the MCS Holiday Fair on December 5.