In spite of all the snow at the beginning of February, we managed to hold both our February meetings and all but one of the Tuesday night Bingo events.

In case people have not heard, on January 24, Governor Chris Sununu proclaimed 2017 to be the Year of the Lion in NH, recognizing the many services provided by Lions Clubs across the state.

READING IN THE SCHOOLS:  On four separate days in February, the following Lions read to students in grades K-2 at Moultonborough Central School:  Joe and Pat Keegan, John Menken, Mark Cotrupi, Peter and Kathy Allen, Dawn Law and Sally Sibulkin.  In March, we will have a special treat in store for us — on four Wednesdays in a row we will be read TO by the Kindergarten students.

The February dinner meeting, started at 6:30 with a social half hour followed by a Pot Luck dinner. There was more food than even double the number of members who attended could consume. Everything was delicious, but from what I heard, the favorite dish was the minestrone soup created by Larry LaPoint’s wife. The appetizers prepared by Don Trudeau’s wife were also a hit as well as three decadent desserts.  Actually, everything was delicious!!!

Unfortunately, we lost a fellow Lion in February — William Schultz.  Bill had been a Lion for 29 years and served on many committees, was president of the club, and exemplified the Lion Motto: We Serve.

We also finally purchased a new raffle wheel for our raffle sales.  The old one finally broke down.  The new one is gold —  like the pot of gold

at the end of the rainbow 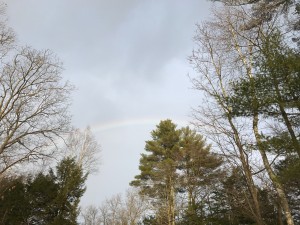 which leads us into more March happenings:

March 5: Meet the Candidate Night at the Lions Club, beginning at 6:30

March 6: Board and Business Meetings. Board starts at 6:30; business meeting at 7:00

March 9: Vision Screening in Thornton  and Distributing new books to all the students at Sandwich Central School

March 10: Remembering Annie Forts – UP Fund-raising celebration. This will be at Church Landing from 7-10pm. Tickets are $25/person or $45 for two and can be purchased online, at George’s Diner or from Don Trudeau.

March 20: Dinner Meeting (back to the regular 6-7 social hour time)